Hopefully at some point in your life you have laced up a pair of ice skates, be they hockey, figure, or those stylish double-bladed ones your parents forced you into as a child.  Whether you’re the next Ron Ellis, or a complete bender, chances are pretty good you had a great time falling down, getting up, and whizzing past your friends.

But for quite awhile, unless you were lucky enough to live in a year-long winter wonderland where the ponds were always frozen, skating on that precious ice was short-lived.  Then, the dawn of the indoor ice rink!  Allowing ice access year-round for  toe picks and flicks.

Did you ever wonder what kept that solid sheet of white frozen indoors?  The art of creating that perfect skating surface that won’t cramp your style racing up the boards or landing a double axel is now down to a science. 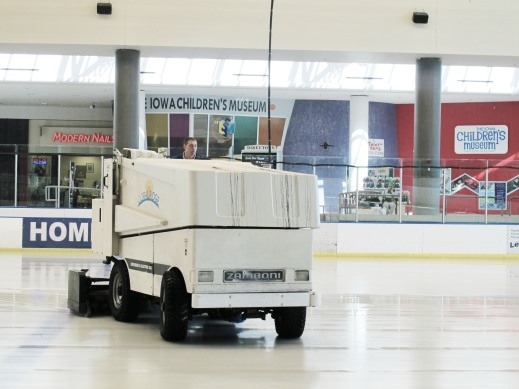 General Manager at the Coral Ridge Ice Arena in Coralville Iowa, Todd Garrison, has been resurfacing ice for over six years at the mall ice arena.  While he claims that driving a Zamboni is nothing to write home about, he admits there is some fun being the guy at the party who can say he knows the coveted ride well.

The ice in an indoor arena is only about one inch thick and frequency of resurfacing or “cleaning” depends on usage.  When ice is cut up by skate blades, it creates snow, which slows down the skaters, and more importantly in hockey, the puck.

Maintaing the ice behind the scenes, there are two types of rinks, concrete and sand based.  Laced within these surfaces are miles and miles of piping containing a chilled chemical, usually freon or a similar refrigerant.  The freon is constantly pumped through the pipes via compressors (usually kept in a very noisy room) and returns to be cooled again before making another lap.  The freon is kept at around negative six degrees fahrenheit through the season to keep the ice layer frozen solid whether you’re racing up the boards or landing a double axel.

Over sixty years ago, Frank Zamboni set out to create the first ice resurfacing machine.  Before the dawn of the iconic Zamboni it was just a big mess of scrapers and hoses.  The Zamboni makes ice cleaning easy (and fun!) while simultaneously removing a thin layer of the scraped up ice and evenly laying down a new layer of hot water to freeze a new clean surface.

Why hot water you ask?  Watch this video to find out!