“Off-season” gives the impression of a time for rest, but that’s far from true when you are one of the most talented franchises in the National Hockey League and the reigning Stanley Cup Champion team.  Summer 2013 was anything but dull for the Chicago Blackhawks, from the Cup-winning game to record-breaking parade crowds, saying good-bye to a few good Hawks and signing big checks to others, the draft, some hideous Team USA sweaters, right up to training camp, it’s been an eventful summer for the Hawks.

There was a lot of action this summer, but just in case you missed it, here is your Chicago Blackhawks Summer 2013 Summary from Just Puckin’ Around:

Seventeen seconds were all that separated Bryan Bickell’s game-tieing goal from Dave Bolland’s game-winning goal.  With only 59 seconds to realize exactly what had just happened before it was official, Chicago was bringing home Lord Stanley.

Which led to this.

And a lot of this.

Record breaking numbers of Blackhawks fans clad in red sweaters flooded the streets of Chicago and Grant Park for the parade and rally.  Arriving at the gates before sunrise and sprinting past some of my slower fellow fans I was able to get a spot at the “front” of the crowd.

WATCH it on vine.

Corey Crawford was the real treat of the rally, making standing around, packed like sardines in 80-degree weather wearing a heavy hockey sweater totally worth it.  As tradition, Patrick Kane handed off the Blackhawks belt to the MVP of the playoffs, and what came out of Crow’s mouth was pure poetry…

Blackhawks announce it will use compliance buyouts on defenseman Steve Montador and left wing Rostislav Olesz.

Brandon Saad was among the three finalists for the Calder Memorial Trophy to be named to the 2013 NHL All-Rookie Team.

Approaching the 2013 National Hockey League Entry Draft, the Blackhawks traded away forward Dave Bolland to the Toronto Maple Leafs in exchange for 51st and 117th overall selections in the 2013 draft, as well as a fourth-round pick in the 2014 draft.

Dave Bolland is on his way back to his hometown, Toronto… for picks #51 and #117 this year, and a 4th rounder next year.

The day wasn’t over before the Hawks also said good-bye to Michael Frolik, trading the forward to the Winnipeg Jets for 74th and 134th overall selections in the 2013 draft.

Another Blackhawks trade to announce: Michael Frolik to Winnipeg for picks #74 and #134 in this #NHLDraft.

Bryan Bickell’s contract extends another four years with the Chicago Blackhawks.  The 27 year-old forward earned his stay on the Hawks roster after a fantastic season with a career-high 17 points (9G, 8A) in 23 playoff games and 23 points (9G, 14A) in the regular season.

Just want to say thanks to all the hawks fans for a amazing year and the Blackhawks staff for all they did for me just heading back home.

“We are pleased to announce that Nick will remain a core member of our organization,” said Vice President/General Manager Stan Bowman. “Over the course of the past three seasons, Nick has shown continuous development and we think he will be essential to our long-term success.”

Couldn't be more excited to be back with @NHLBlackhawks for two more years. Best fans in the league!! Happy Fourth of July everyone!

After 2 seasons and a Stanley Cup Championship, goaltender Ray Emery has parted ways with the Chicago Blackhawks, signing with the Philadelphia Flyers as a free agent.

Emery previously played with the Flyers in the 2009-2010 season.

The last time Nikolai Khabibulin wore a Blackhawks sweater was 2009.  Now he’s ready to once again suit up in the red and black for another go.

The seasoned goaltender has agreed to a one-year contract with the Chicago Blackhawks.

The #Blackhawks have agreed to terms with goaltender Nikolai Khabibulin on a one-year deal. http://t.co/VHl7GFhihS

Viktor Stalberg has signed a 4-year contract with the Nashville Predators worth $12 million.

RFA Marcus Kruger agrees to a 2-year deal with the Chicago Blackhawks.

Kruger registered 13 points, (4G, 9A) including two game-winning-goals in this past season.

The Blackhawks begin their search for a player to fill the open 2nd line center position.  Many names have been thrown into the mix during prospect camp including leading AHL point-score, Brandon Pirri.

(Hey! Check out this interview I did with Brandon Pirri and Jeremy Morin: WATCH VIDEO.)

NHL players will be available to the 12 participating IIHF Member National Associations for the men’s Olympic ice hockey tournament (February 12-23, 2014). This will mark the fifth consecutive time dating back to Nagano 1998 that NHL players have participated in the Olympics. More than 120 NHL players are expected to compete for their respective nations in Sochi.”

Toews, Keith, and Seabrook were a part of Canada’s 2010 gold medal-winning team.

Patrick Kane, Nick Leddy, and Brandon Saad were among the Blackhawks to receive an invitation to Team USA’s Orientation Camp.

Kane was a part of Team USA’s silver medal-winning team in 2010.

Head Coach Joel Quenneville has been given a 3-year contract extension which will run through the end of the 2016-2017 season.

Quenneville is entering his sixth year as head coach of the Chicago Blackhawks, with two Stanley Cup Championships under his belt.  Coach Q was a finalist for the 2013 Jack Adams Award.

Q: "The passion for the team has gone to another level." #Blackhawks #BHC2013

Blackhawks’ first round (18th overall) pick in the 2012 NHL Entry Draft, Teuvo Teravainen, has agreed to a 3-year contract with the Chicago franchise.

Teravainen, currently playing with Jokerit in SM-Iiiga, Finland’s top professional league, will likely spend one more year overseas before making the jump to the States.

Team USA unveiled their sweaters for the 2014 Sochi Olympic Games to less than enthusiastic reviews.  These poor “sweaters” have an overly simplistic and yet somehow gaudy design.  Clad with a “USA” crest that makes me want to go buy a pair of K-Swiss tennis shoes, matte stars on the shoulder pads and FAKE lacing, this thing looks more like an oversized soccer jersey than anything.

Jonathan Toews doesn’t look too pleased with Team Canada’s sweaters either in this leaked photo: 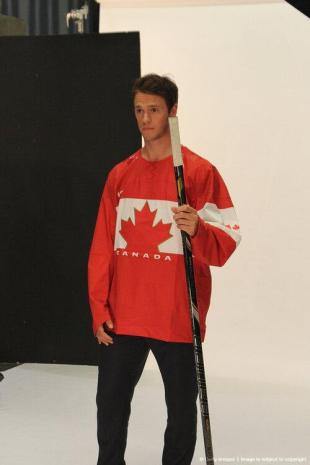 Blackhawks goaltender, Corey Crawford, earned himself a 6-year contract extension through the end of the 2019-2020 NHL season worth $36 million.

He was pretty happy.

Crawford, on conference call: "I want to be in Chicago for my whole career. This is amazing to get this deal done." #Blackhawks

But there were plenty out there wagging their fingers at the Blackhawks, calling it a bad play on the Hawks part to prematurely invest so much time and money into a goaltender who only has only just begun to come into a consistent stride between the posts.  Only time will tell, but if Crawford can match and improve upon his growth this past season, he’ll be worth it.

Niklas Hjalmarsson agreed to a 5-year contract extension with the Blackhawks.

Vice President and General Manager Stan Bowman became the youngest GM in NHL history to win a cup title in 2010, doing it again in 2013 the Blackhawks decided to reward the 40 year old Bowman with a two-year contract extension.

A full roster of training camp participants is available here.

The Blackhawks will open their preseason match-ups on September 17th at 7pm CT when they host former division rival, the Detroit Red Wings.